Home  / A Fitter Life
Previous  / Next

To ski 10 days a season is nice, 20 days is even better and those lucky folks who ski 40 or more days a season are either in the industry, live on the slopes, or have something figured out in their lives to afford them the luxury to do so. The more days you ski the more you appreciate the benefit of effective ski conditioning and seriousmid-season ski legs!

If you are reading this blog, it’s likely you are very interested in being a stronger skier. In the past, you or a loved one may have experienced an injury that shortened a ski season, a ski trip, or reduced your general strength and well being. Whatever your reason, Pro Fitter has been tried, tested and a proven product since its inception in 1985 for the exact goal of developing  mid-season ski legs and confidence on your first day hitting the slopes. It seriously reduces your risk of injury, while being tons of fun to use.

As the developer of the Pro Fitter I spent a number of years learning about ski trainers made in the 1960 and 70’s. There were two basic designs. Single arch and double arch or cigar shaped rocking base. I preferred the rocking base as it involved more balance from the user and was easier on the surface below it. The next factor was resistance, choices included; heavy rubber bands, shock absorbers, springs and bungee cords. Bungee’s were my choice for ease of adjustment, accessibility, flexibility and cost. Finally, I had to consider how the foot pads would angle to mimic edge setting; they could swing, flex on rubber or pivot on a hinge bolt. In our case, I chose the most difficult route as it was best, rubber mounted flexing-rotating foot plates. 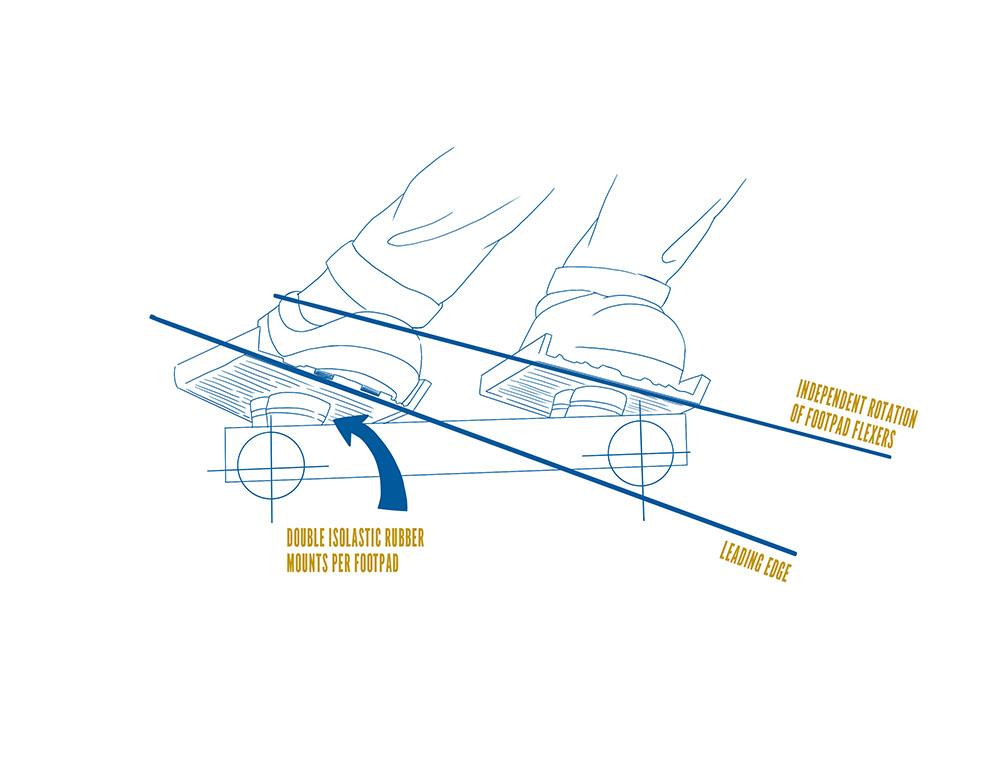 This all mattered as I was working with top Sports Medicine Physiotherapists who were rehabbing Canadian National Ski Team Members.  Pro Fitter from the start had to be effective for knee rehab on World Cup Skiers and my own knee and double foot surgeries. Proper loading of the forefoot and heel during weight transfer was critical and we knew it could not be achieved effectively on fixed angle swinging foot plates that did not offer some degree of rotation.

Pro Fitters rocking base feels unstable, similar to skis on snow.  Its flexing rotational foot pads use lower leg muscle groups similar to the way carving skis use them on snow. You learn to drive the inside edges of the pads into the carve just like you would on snow. Initiate the carve off the forefoot and end the carve by unloading closer to the mid-foot or heel.  It is subtle but the calve power and edge control you can develop is amazing and your ankles will be stronger than ever!

As a past World Cup Speed skier, I promise strong ankles are superior to weak ones in a good fitting ski boot. I suggest that users should pretend to wear their ski boots and develop their muscles to do the work to hold the feet and ankles in the right position. You will be amazed at the results you feel once you have gained the strength and control of your lower legs on the Pro Fitter,  as it all starts from the ground up!

Folks so often ask me ‘will it make me stronger?’  And I know they want to hear ‘Yes it will make you much stronger!’  The fact is it does so much more than just give you stronger legs.

Pro Fitter is and always has been the whole meal deal for athlete’s, families, clinics and gyms for the simple reasons that it was well thought out, built tough, and every inch of it is fully functional!

There may be 20 functional exercises that you can do, but seven form the foundation ofMid-Season Ski Legs for opening day. Once you understand the basics of;

Get these things right up front and everything else is much easier in the future.

Next you are ready to learn how to clearly differentiate between the movement of Slalom, Giant Slalom and Downhill lateral exercises. 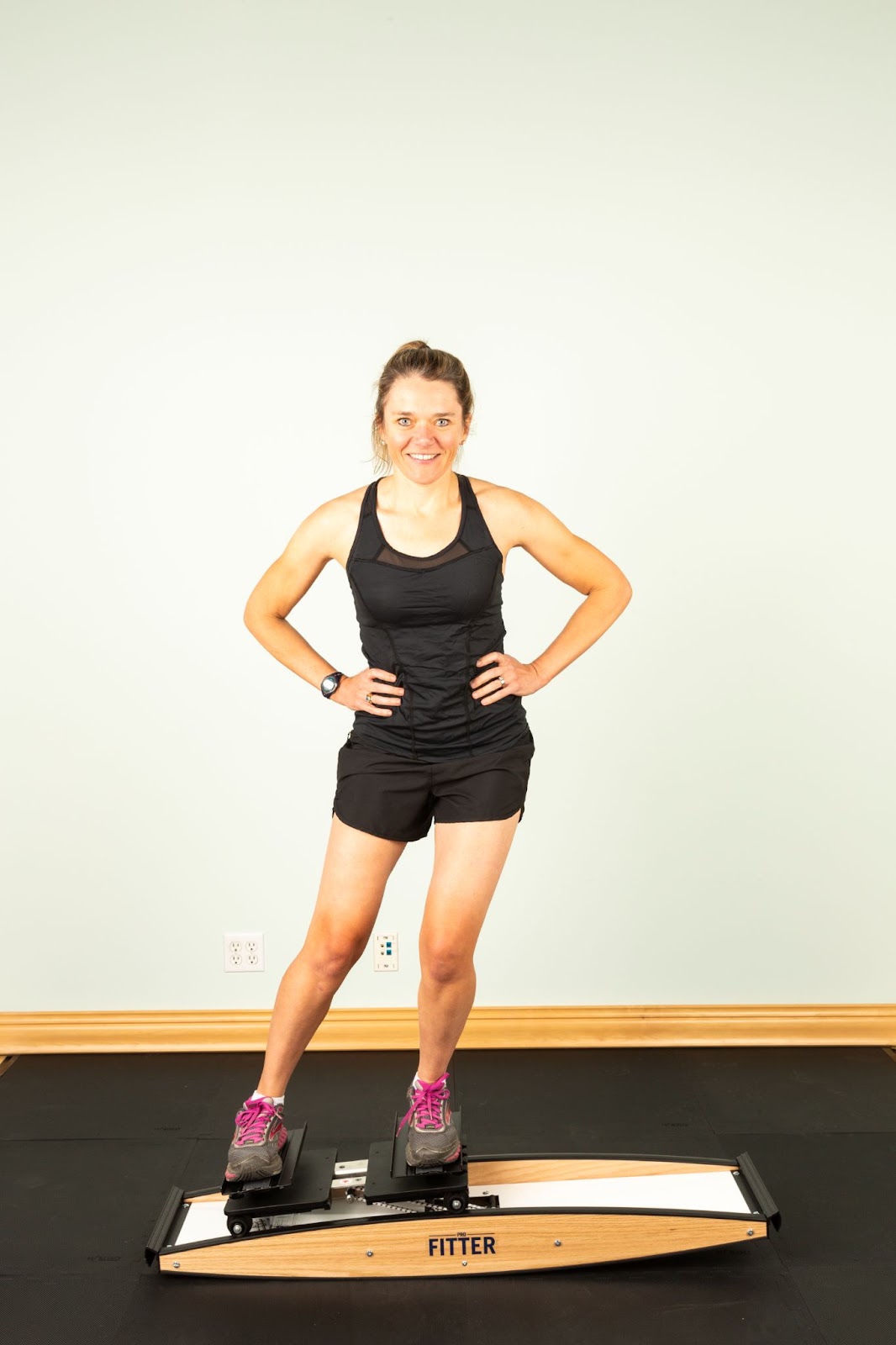 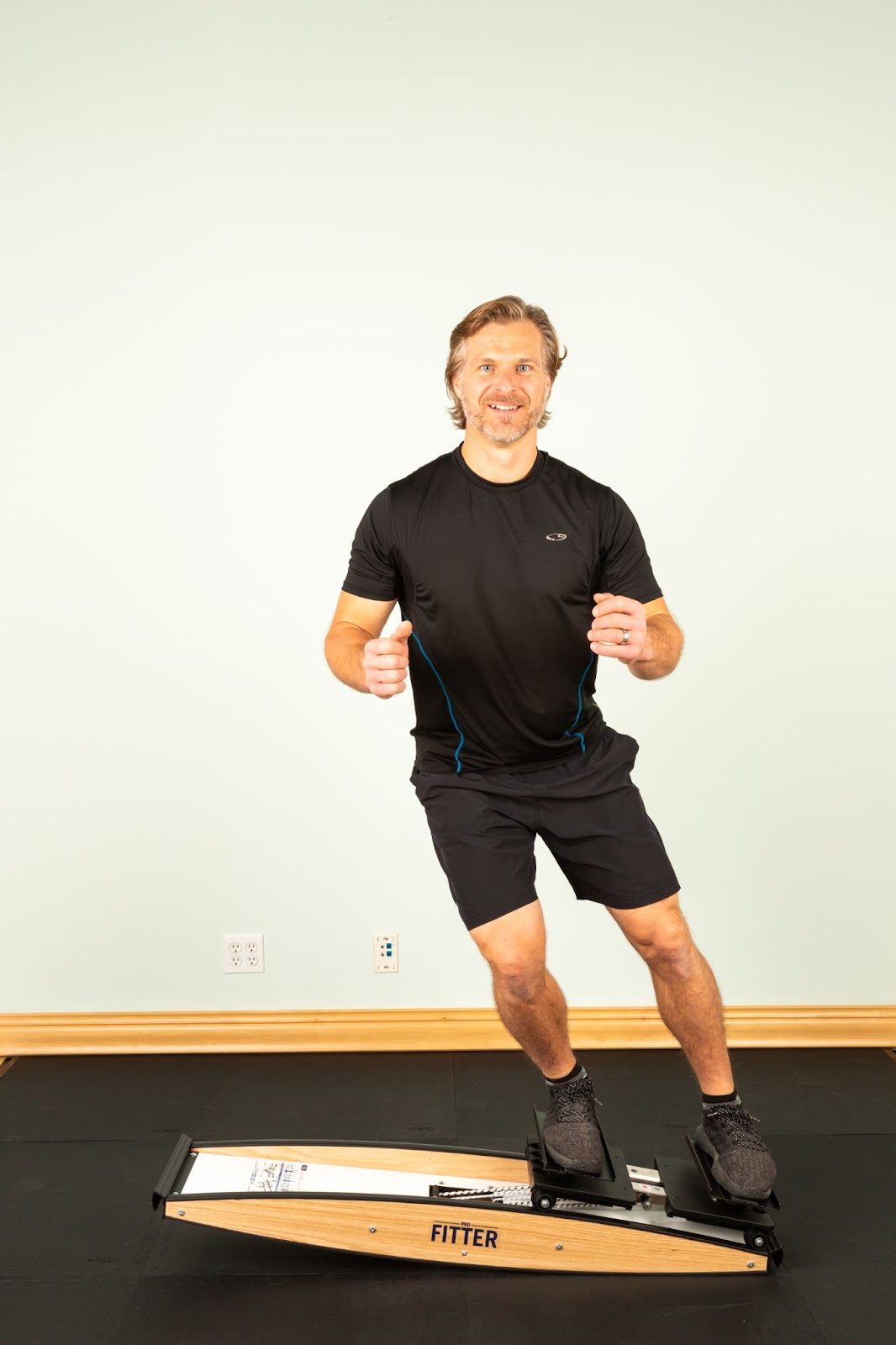 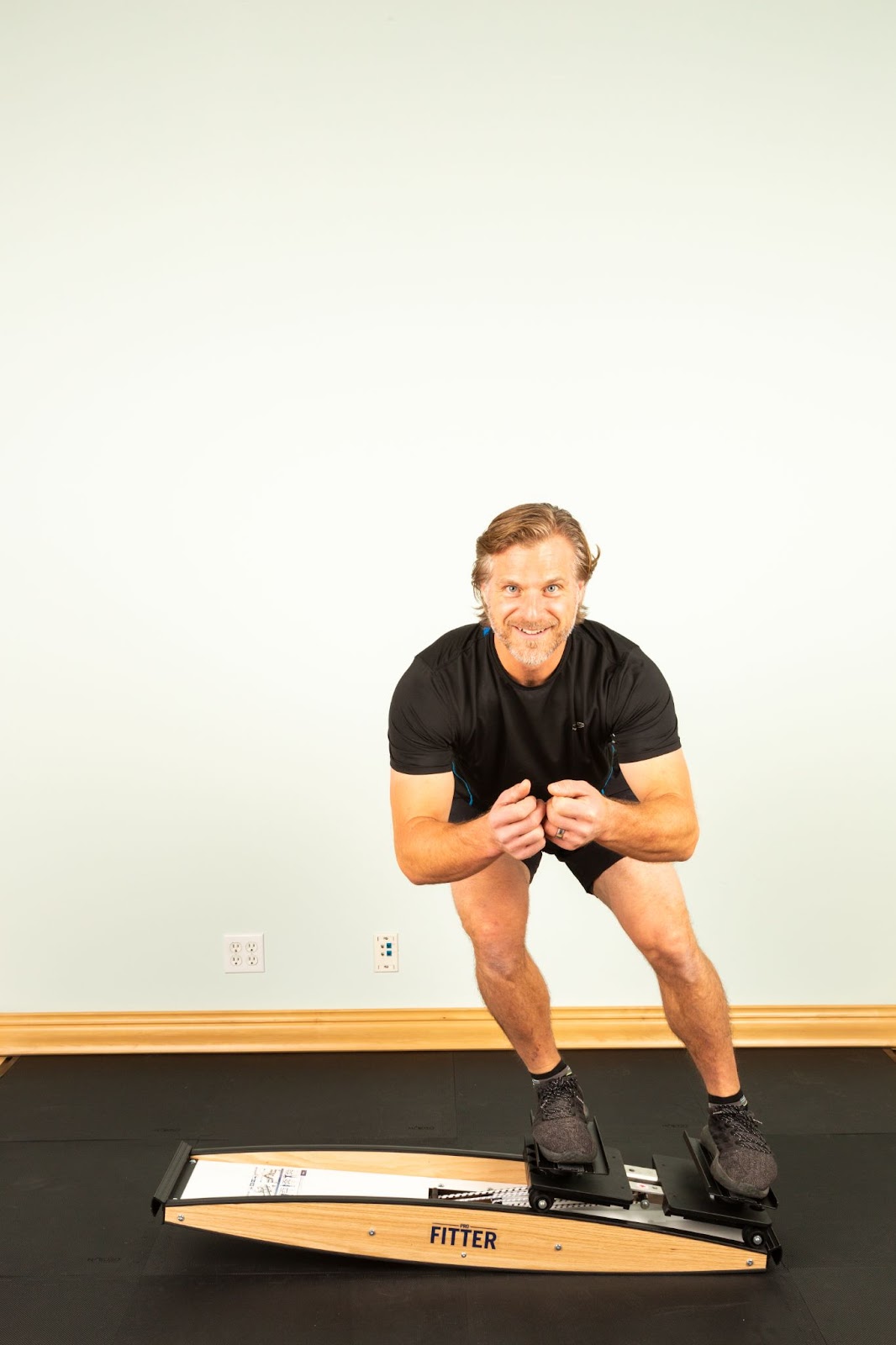 The most important thing here is to build a great foundation!  You must see your form in a mirror, window or picture reflection and determine if you drop one hip back, favor one ankle, throw one arm, wobble your head or have any other bad habit on the Pro Fitter as they will be a carry over from skiing's bad habits or other past injuries. We always favor the weaker side or the side we have had injuries on which is the side we are much more likely to re-injury in the future. Now is the time to correct that foundational problem and rid yourself of it forever.

Muscle Balancing is achieved by using the PF’s next four primary exercises of which each one is done on both the right side and left side. With proper heads up athletic stance, and starting on a tension setting one easier than for GS, the end caps come into play allowing for some amazing muscle control, comparison and balanced recruitment. The exercise chart explains each exercise and the goal is to master each in perfect form, done correctly for the same number of reps on both your stronger and your weaker side. Unless you are a seasoned athlete or in prime condition and injury free in life you will have a strong and weak side in at least some of these four exercise.; 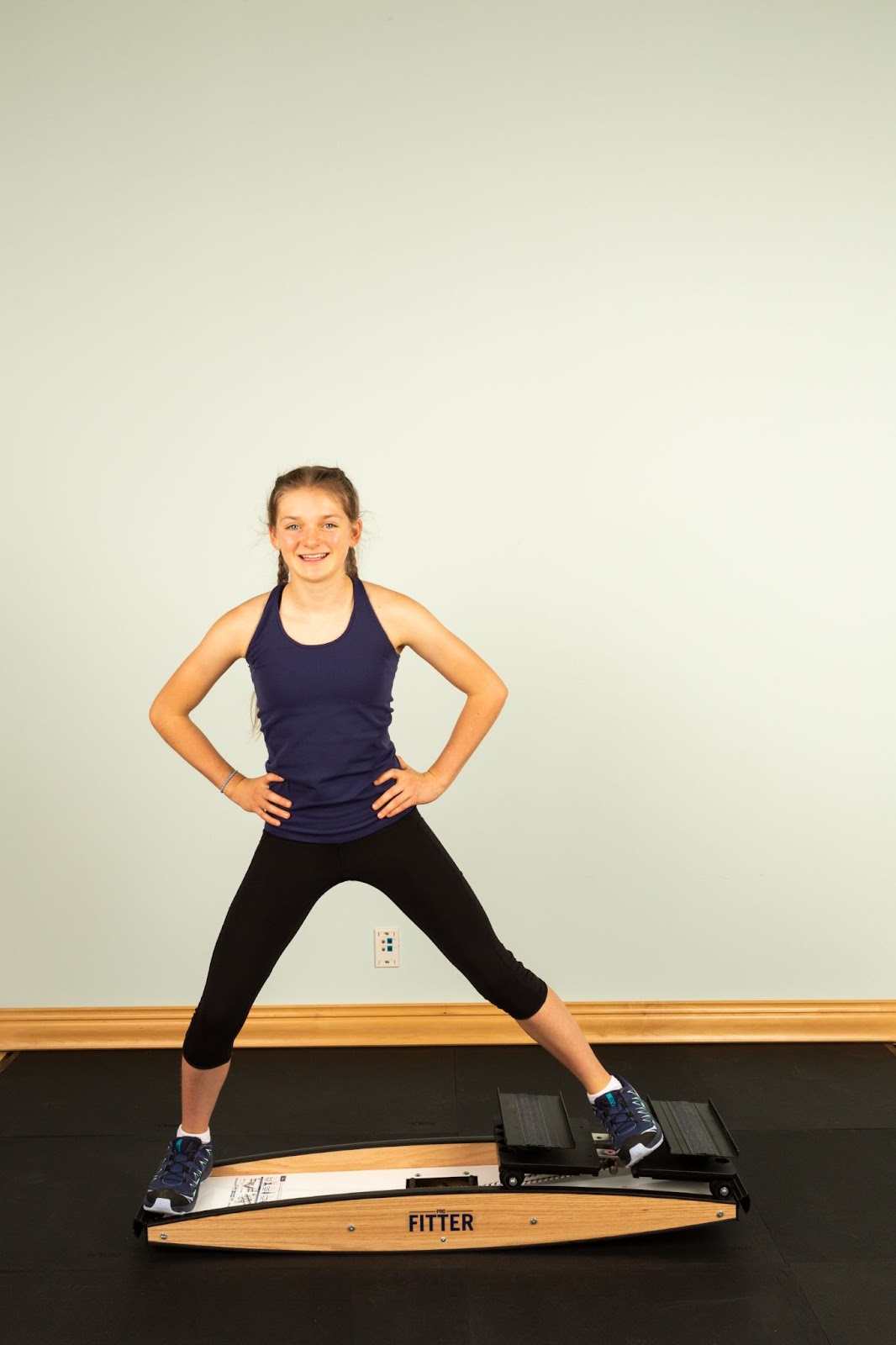 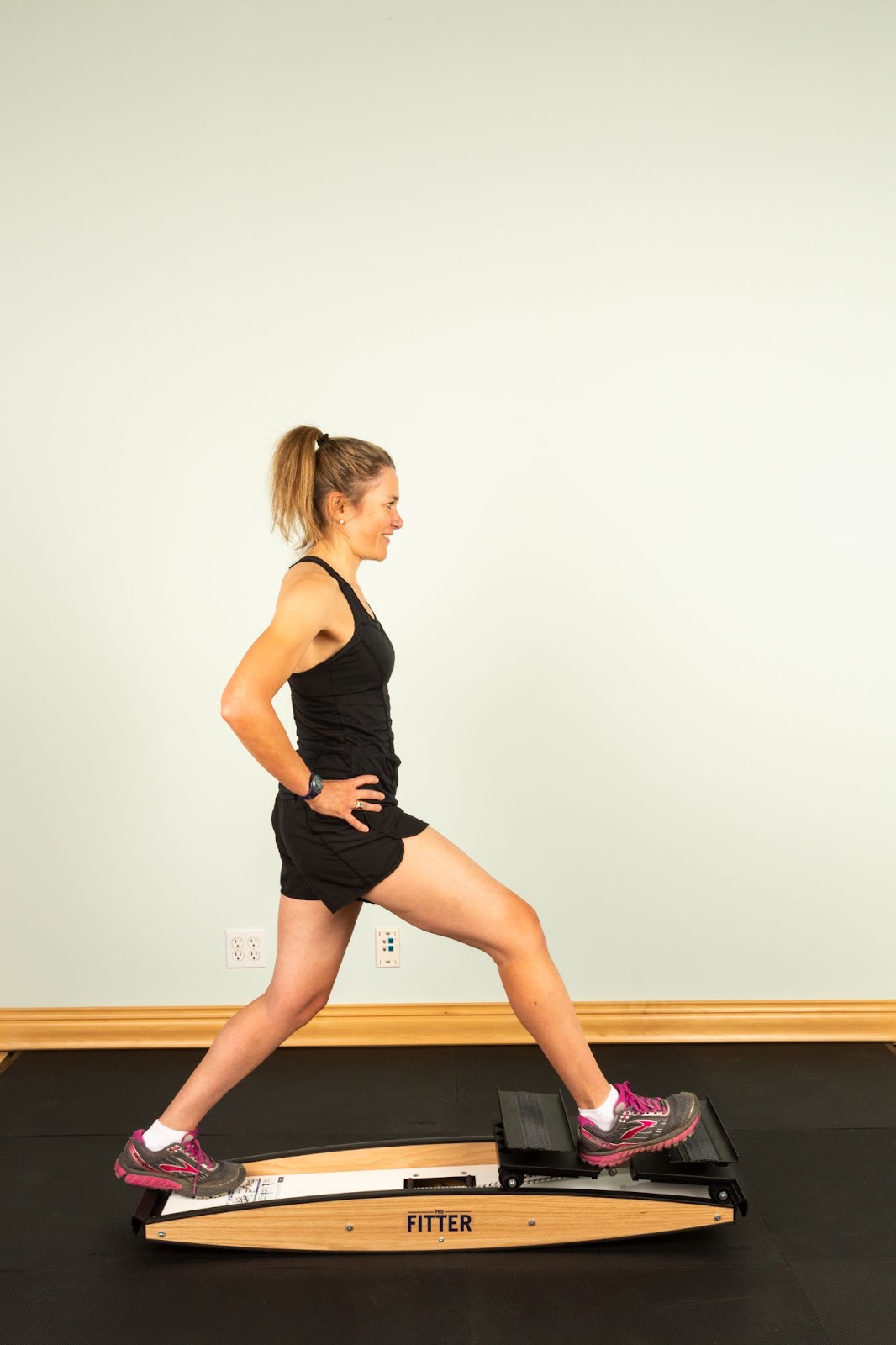 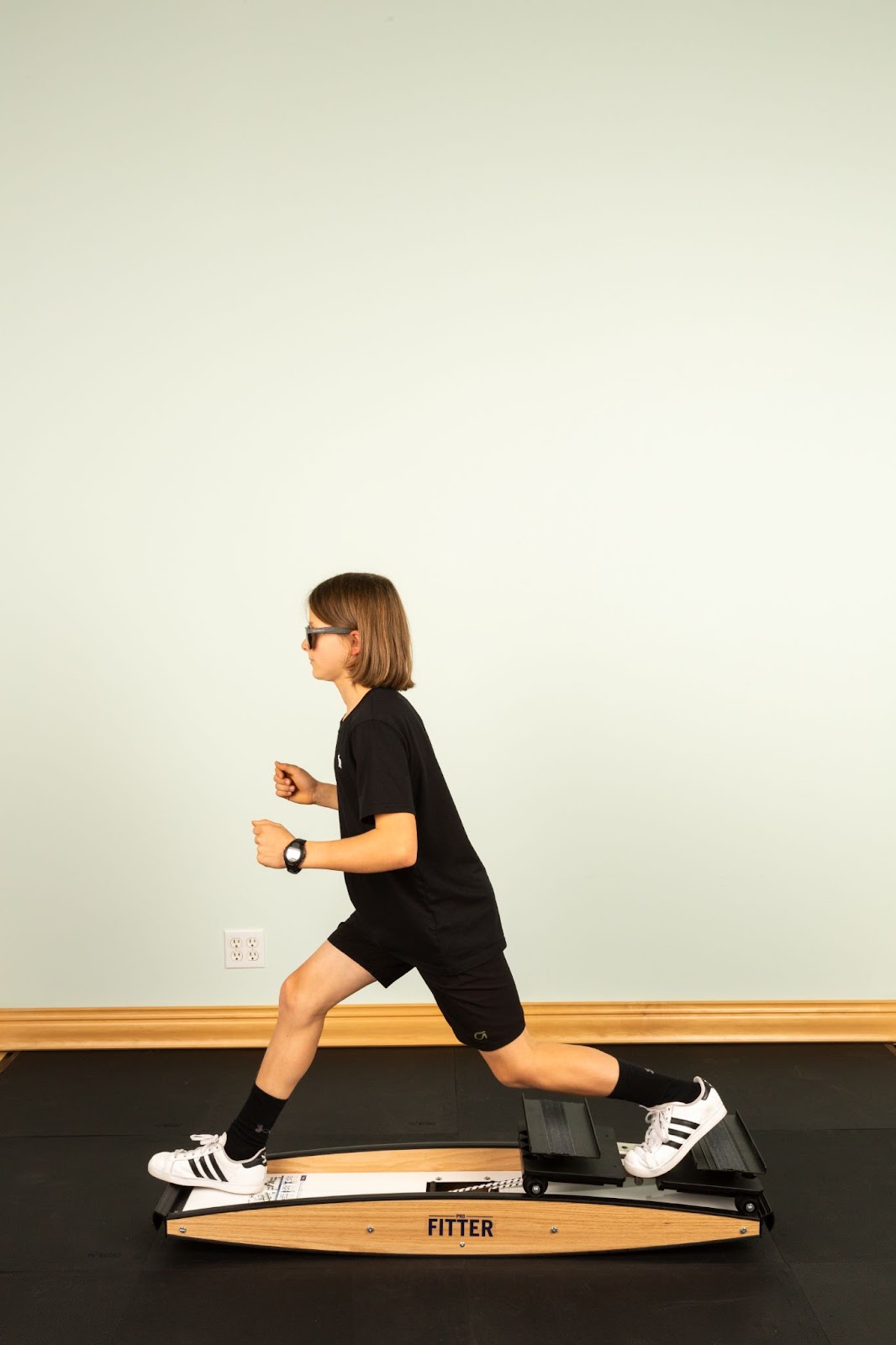 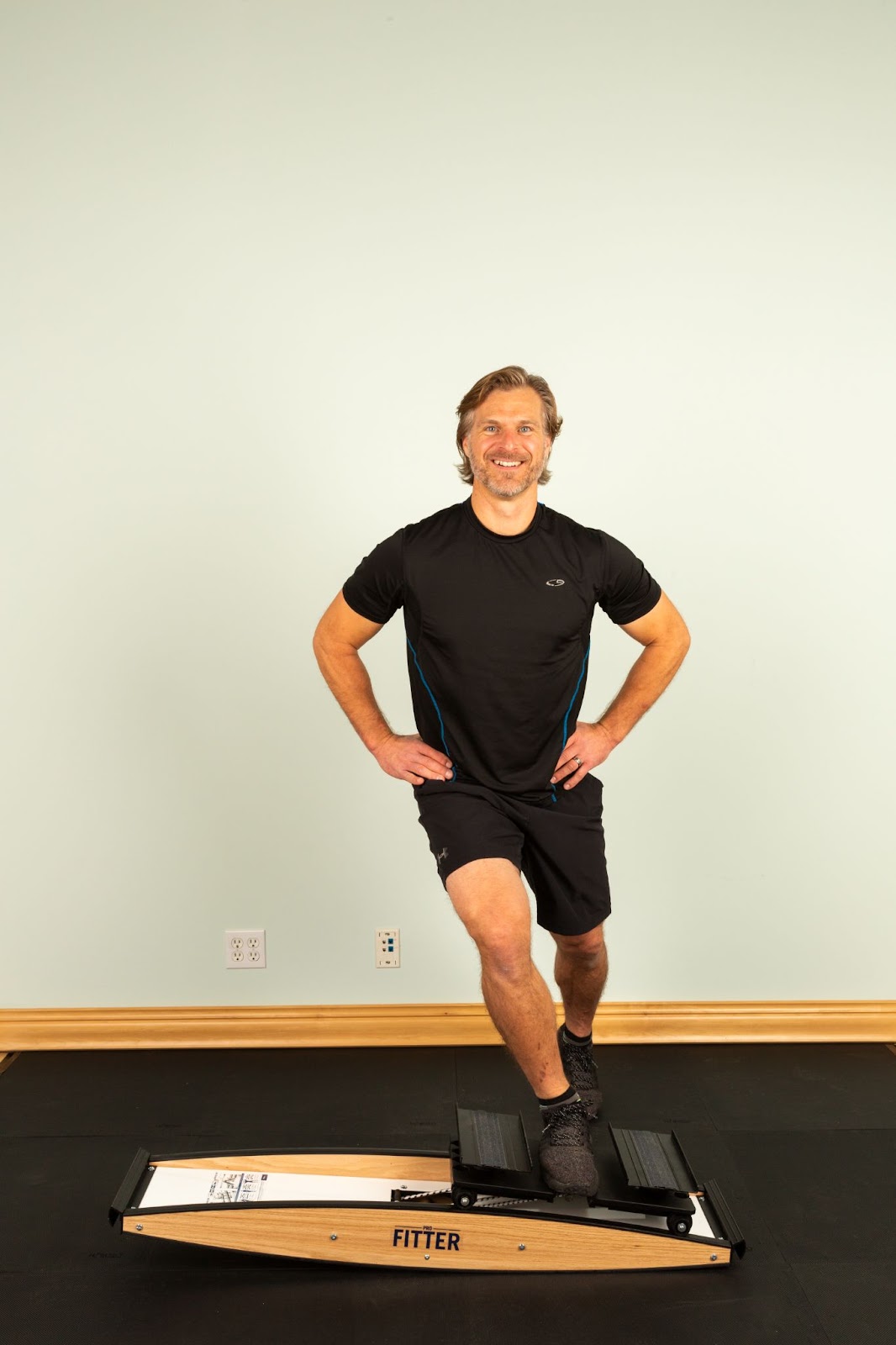 To master these you need to own muscle control across the centerline of your body, control your balance on the rocking base, develop & balance your quads and pelvic girdle strength, and finally maintain ankle stability with calve muscles to mimic edge setting positions.

With frequent three to six minute practice sessions on Pro Fitter you will be surprised how fast you gain confidence, which leads to control and skill growth.  Strength and endurance follow close behind as you start to feel control over various muscle groups in quads and calves.  More like a sport,  Pro Fitter is fun and challenging to master and it can be made into a game or family challenge. If you want an aerobic or even anaerobic challenge just up the tension add some light hand weights and go for 20 to 30 minute on a setting you can handle. Just keep your head up and look in front of you as your body becomes more and more challenged on all levels.

Pro Fitter never gets outdated  like skis and boots. The entire household  can use it from four years old and up, with a spotter and common sense.  It makes very little sound and weighs in at 25 pounds.  The maintenance is $30 annually for tension cords (they take under two minute to change with no tools) plus a can of WD40 to keep the top tracks clean. We build them very tough for commercial use in Calgary beside the Rocky Mountains with Canadian and USA parts.

The best thing is Pro Fitter:

If you like activity and want to keep playing in life, the best thing to do is play everyday. If work and city life sometimes gets in the way, Pro Fitter does an awesome job of filling the gap until next time you're on your board(s), bike, hike, water or whatever.  Just keep playing and stay young no matter what number of years you have been playing for!

“Balance is the Essence of Movement

Movement is the Essence of Life!”